April 27, 2018 By Charles Russell in Blockchain

Against the backdrop of hype, promise and innovation, real-world adoption of blockchain technology has been markedly slow.  While many businesses and organisations have shown a willingness to learn more about distributed ledger technology (DLT), the overwhelming array of available options (many of which appear to offer the same thing), has led to an inertia that seems to be as immutable as the technology itself.

In an attempt to clarify the status quo and provide a sanity-check for those who feel as they should be on board this futuristic vessel, Forbes contributor Joe McKendrick has recently published an article entitled ‘How to Test The Waters Before Diving Into Blockchain’.

“A recent survey of 200 business leaders by SAP finds while 92 percent view blockchain as an opportunity, only three percent actually have blockchain in production. The two most promising applications seen for blockchain include supply chain management and legal/regulatory oversight.” [Read More]

Three percent is indeed a strong indicator of this hesitancy to move away from traditional technologies, and like the proverbial flock of sheep, the industry at large is waiting for a wizened shepherd to lead them to the greener pastures beyond the risky woods.

McKendrick’s article essentially repackages a new report from the World Economic Forum which presents an infographic route map posing eleven questions that businesses need to ask themselves before considering a blockchain solution.

“One of the most unique aspects of blockchain is its high number of evangelists – people who believe blockchain can solve everything from global financial inequality, to the provision of ID for refugees, to enabling people to sell their houses without an estate agent. The enthusiasm to (over) promote the technology is also damaging its long-term prospects.” [Read More]

The starter question on the route map is: “Are you trying to remove intermediaries or brokers?” 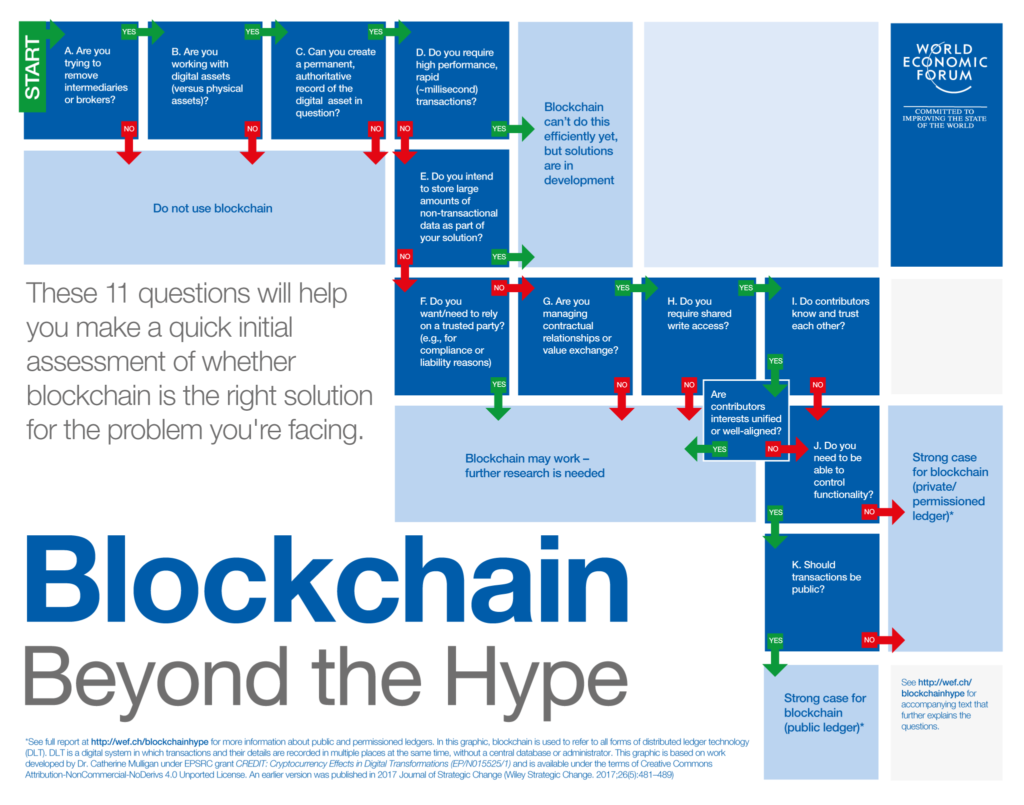 McKendrick provides his own example, using the banking industry and the open source blockchain solution CORDA, whereas the WEF example uses a SFX company and a rather peculiar scenario whereby the blockchain is used to manage a globally distributed network of GPUs (due to various same-but-different terms, tracking the transactional data for nodes on a render farm isn’t the most clear-cut example and it took me a few passes to dismiss the impression that their understanding of the blockchain was horribly wrong).

Reading further down the list of questions on WEF’s flowchart, it strikes me that a number of the prerequisites for whether or not to use the blockchain are tethered to the fact that it’s still considered an emerging tech (we’re coming up to its tenth birthday).  Using a medical insurance company as its second example, the WEF concludes that industry regulation, trust issues and compliance are still major obstacles and could be show-stoppers for those investigating a switch to a blockchain-based model.

“However, the solution encounters challenges when considered from the perspective of needing trusted sources and compliance. The medical industry is heavily regulated and requires insurance providers to provide detailed oversight of their activities, in particular with respect to the management of end-user data. The solution, therefore, fails at this point. DLT is not the best choice for the concept outlined” [Read More]

As with all emergent technologies – especially those which fundamentally change the way we process and interact with our precious data – a certain degree of caution and confusion are par for the course. And to be fair, McKendrick’s article and the WEF report do distinguish between public and private ledgers.

Other questions posed will undoubtedly become moot as the technology evolves: whether a permanent record is required; whether you need high-performance millisecond transactions; and whether you wish to store large amounts of non-transactional data.  All of these features, if not already available, are being vigorously developed: non-permanent records can be flagged as deleted or shifted to a private archive ledger with restricted access; performance will increase as more efficient, miner-less models are designed; and there’s already a number of blockchain protocols that can accommodate physical files (recent projects such as IPFS, STORJ and Arweave each have their own solution).

In summary, it looks like the blockchain is here to stay.  And now that the froth of the initial cryptocurrency binge is being wiped from the lips of the winners and losers, it’s time for a more considered and mature approach to real-world blockchain solutions that’ll enable business to migrate with less uncertainty.