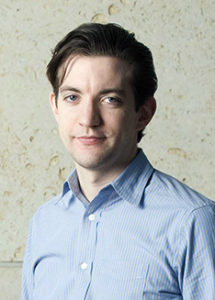 If you’ve ever wondered about the three R’s of digital asset management, Jared Bajkowski covers this and so much more in his DAM interview.

I’ve been the Digital Assets Manager at a large non-profit for four years. At the Howard Hughes Medical Institute, we fund scientific research at labs around the world—which means a lot of digital assets. Most people outside of science aren’t familiar with us, but we’re actually the second largest philanthropic organization in the United States. I am the institute’s first Digital Assets Manager, so my primary goal was to lay the groundwork for the policies and guidelines for current and future records. Once the DAM was established I oversaw the process of bringing the current records online while continuing to catalog new assets as they came in. Building a strategy and policy from the ground up was exciting to me (still is).

My day-to-day now is managing the flow of new photography, design files, research imagery, video clips, contracts, etc. into the system. Often I’m curating customized collections for media outlets, web developers, graphic designers, or colleagues as needed for internal and external production. I also manage the institute’s graphic identity within the DAM, so I often work directly with designers on appropriate usage of our assets.

DAM boils down to what others have called the three R’s: repository, reuse, and rights. Media is born digital these days and few organizations have physical file rooms anymore, so DAM is your digital vault keeping these items safe, centralized, and backed-up on your servers. Detailed metadata also makes it possible to quickly find items, eliminating potentially redundant photo or design projects. Finally, item records will make it clear what you do and don’t have copyright clearance for. Basically, a good DAM protects the money you’ve already spent, makes that money go farther, and guards against lawsuits.

When I first transitioned from being a librarian to a Digital Assets Manager, I found much of the underlying philosophy of cataloging and preservation familiar, with some different nuances. Learning new terminology and graphic design workflow was important, and local Meetup groups and conferences were important to help me catch up. I found Henry Stewart’s DAM New York conference and the Journal of Digital Media Management to be particularly helpful.

What makes DAM go isn’t the technology or assets or policy (though they are important). What makes an effective DAM is user buy-in—never forget that. You could have the best system on the planet with perfect metadata, but it’s all worthless if your team isn’t using it. People need to see their work life getting easier with DAM around, and not just see it as more work. Talk to the team to identify the pain points in their workflow and then tailor your DAM to solve that problem. Solve peoples’ problems, and they’ll become your best evangelists for the system.

When the DAM was initially established, I was trying to standardized about five years’ worth of metadata from the old system. Previously there was no authority control so it was a bit like the wild west for metadata. Batch processing helped but trying to deal with this wealth of assets in a detailed manner was driving me crazy. Finally, under the advice of some DAM colleagues, I made my peace with the older assets and focused on the newer entries. This made sense since these were the assets people were actually using anyway. Focus on the present and future, and do what you can with the past.

Seeing people use the system outside my department was a thrill the first time I saw it happen. That’s when I knew all the training, meetings, outreach had worked. After all the hard work we put into it, seeing the DAM was out there in the wild, doing its job was a big moment for me.